"Learn from Experience, Lead by Example" 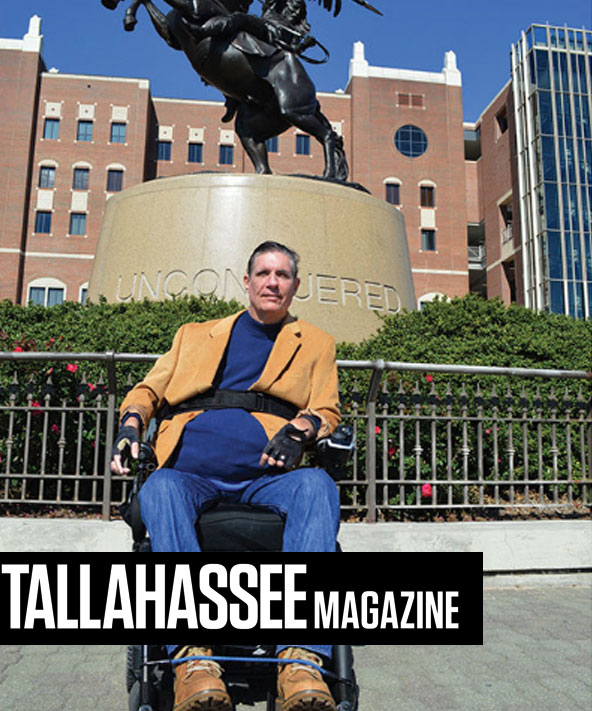 J.R. Harding was speaking literally when he said that there are doors that open for everyone and some that do not.

While a 27-inch doorway is standard, he noted, 32 inches are required to allow for entry by wheelchairs.

“You are going to hang a door, that’s a given, so why not make it 32?” Harding floated a question. “Accessibility by all is good for all.”

But Harding could as well have been speaking metaphorically about doors of opportunity or enrichment or achievement. Paralyzed since high school, he has ambitious goals for Florida State University, where he received a doctorate in higher education and public policy in 1999 and currently works as an instructional specialist reporting to the provost.

He intends that FSU, a school that champions diversity, become a “school of choice” for persons living with disabilities and, in the process, emerge as an aspirational leader inspiring other schools to do likewise. That is, he believes that FSU, as an institution, can do as he has done as an individual.

Harding was a talented high school senior fielding athletic scholarship offers when he was jumped from behind by two football teammates who sought to punish him for skipping a mandatory meeting with the coach following a difficult loss in a playoff game.

The impact broke his back, collapsed his lungs and punctured his stomach. He was immobilized in an intensive care unit in Indiana for weeks, unable to eat or even breathe on his own.

“There were six of us in ICU,” Harding recalled. “We were all hooked to monitors, and alarms would go off at night and you couldn’t turn to see whose alarm it was. I would listen for the pitter-patter of the nurse’s feet and just hope they went past me. I was grateful when they did.”

Of the six men on the unit, only Harding would survive, albeit without the use of his arms or legs. He benefited, he said, from “youthful delusion.”

“It was better to have been paralyzed before fully entering upon the world than sustaining that injury when you’re 40 and immersed in career and family,” Harding said. “There was a lot of blank space for me to work with, if I could get my mind right. I had many misconceptions about what paralysis meant. I didn’t know there was a difference between a quadriplegic and a paraplegic because you didn’t see quads in the real world. Dreaming about becoming a Paralympian helped carry me through the early stages of my recovery. For a long time, I thought I could get there.”

Harding’s father, a career Army officer, recognized immediately the challenges his son would face. A man used to fixing things on a grand scale, he knew that J.R. was, in many ways, beyond repair. When that realization overtook Harding, himself, he was left with vast questions: What do I do? What is my place? How do I fit in?

“Education was transformative,” Harding said. “It established a new identity for me, and today it is exciting to be back at FSU where my career as an advocate and policy maker got started and where I feel dynamic and empowered. I have come full circle.”

Harding likens himself to a frontiersman who tamed the wilderness. Now, he said, it is his job to recruit more settlers and to see to it that trading posts are equipped to help people meet the kinds of challenges he faced down.

And, in that effort, FSU will be Harding’s partner. The university recruited Harding in 2016, when he was employed at the state Agency for Persons with Disabilities, to join its staff and faculty. Today, he teaches a management class focused on inclusion in the College of Business and rides the circuit as a guest lecturer across several disciplines: special education, social work and finance.

Every cultural change, every dissolution of barriers, every inclusion movement requires a champion — someone to rally around — and it does not stretch credulity to suggest that Harding can be for people with disabilities as Jackie Robinson was for people of color.

He will begin at FSU by reaching out to faculty members and students with disabilities to find out what led them to the university, what their experience has been like, what obstacles they have had to work around. Already, he has the ear of the university president in addition to the provost.

“In part, we’re talking about what FSU can do to maintain its competitive position,” Harding said. “And becoming a magnet for students with disabilities is a strategy we can use in that effort. Minimum compliance is not what FSU is about. We need to talk about creating pathways to excellence. Thirty percent of people with disabilities participate in the workforce. What would it take to get that number to 40? The university can play a role in answering that question.”

Questions. Harding is dogged by them always.

“When is the last time you took a bath in a hotel room?” he asks a writer. “Probably never, so why do we keep putting them in almost every room? For lots of people, they are an unnecessary barrier.”

And later, he would ask that same writer as the two men were exiting the University Club at FSU, “Why did you walk over and press the HANDICAPPED button to let me out? All you had to do was open the door.”

Accessible State Parks, Rish Park, in Northwest Florida
September 21, 2022
Email to self: Inspiring people are all around us by Blake Dowling
August 24, 2022